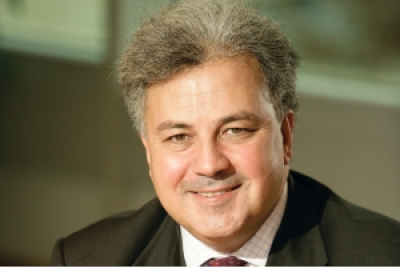 CEO of Hermes Investment Management
Saker is Chief Executive of Hermes, chair of its Executive Committee and an Executive Board Director. Saker was appointed CEO in May 2012, having been acting CEO since November 2011. Saker joined the firm in June 2009 as Head of Investment and Executive Board Director. He is responsible for leading the firm’s growth strategy and ensuring that Hermes continues to deliver excellent long-term investment performance, responsibly. Under his leadership, Hermes has achieved outstanding year on-year growth in sales, revenues and profitability, while contributing widely to the debate about how to improve the contribution of financial services to society. Critically, long-term investment performance has remained at outstanding levels during his tenure. Prior to joining Hermes, Saker was Global Head of Equities at Fortis Investments USA, having initially been appointed to the firm as CIO Global Equities in 2005. Before this he was CIO Global Equities and Head of Marketing for SGAM UK. This role followed SGAM’s acquisition of Trust Company of the West (TCW), where Saker was Managing Director, running global and international strategies, as well as managing TCW’s London office. He started his career at Mercury Asset Management in 1987. Saker is a regular public speaker, writer and commentator, appearing at leading industry conferences, on television and radio. He is the founder of the 300 Club, which he chaired from its inception in 2011 until early 2014. The 300 Club is a group of leading investment professionals who seek to challenge investment orthodoxy and improve the contribution of financial services to society. Saker is a member of the CFA Institute’s Future of Finance Advisory Council, a member of the IIRC Council, and was a public member of Network Rail for three years until November 2014. He was recently invited to join the Banking Standards Board, which aims to restore trust in the UK banking industry, as a practitioner member. Saker also sits on the advisory board of Mosaic, the charity that seeks to improve the chances of young people and to bring communities together. Saker has a BA and PhD in Medieval History from King’s College, University of London. In 2015, Saker was named CEO of the Year at the Global Investor Investment Excellence Awards.
Categories: