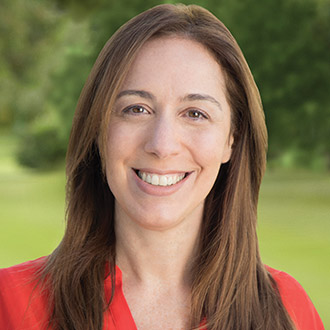 Maria Eugenia Vidal, current Governor of Buenos Aires Province, holds a degree in Political Science by the Pontifical Catholic University of Argentina.
She started her political career in Fundación Grupo Sophia, with a marked vocation towards public policy. Between 2000 and 2007, she worked as Director in the Social Development and Equality Area. In 2003, she achieved a seat in the Congress of the City of Buenos Aires, which was her first political position. During her term, she directed the Committee of Women, Childhood, Adolescence and Youth and she was afterwards reelected in 2007. In 2008 she resigned to her position in the local Congress and took charge of Buenos Aires City’s Ministry of Social Development. A couple of years later, in 2011 specifically, Mauricio Macri chose her to be his right hand during his second term in the City and named her Vice-Mayor. Finally, in October 2015, she got elected Governor of the Province of Buenos Aires, position that she holds since December 2015. By being elected in 2015, she became not only the first woman to rule the Province, but also the first non peronist Governor in the last 30 years.